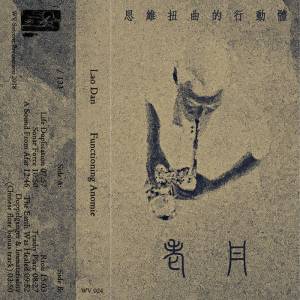 For many a listener hailing from Western Europe or North America, China is not the first nation to spring to mind as a hotbed of improvised and experimental music(s) (this fact is astutely gibed in the title of New Zealand label End of the Alphabet’s superlative compilation containing Chinese artists, There is No Music from China). Enter Lao Dan, alto saxophonist from Nanjing.

Lao’s forthcoming solo debut cassette on Chinese/French label WV Sorcerer Productions, Functioning Anomie, is a work that showcases the many sides of a skilled altoist. Lao’s timbre, though at times unrepentantly caustic – recalling the coarseness of Mats Gustafsson or Peter Brötzmann – also manages to reflect inward: a musical ellipsis that resignedly undulates into an evanescent question mark, that starts to disappear as soon as it is penned. Whilst capable of all the freewheeling charivari of both the aforementioned Gustafsson and Brötzmann, Lao possess a flowing, seductive side that eludes the former players, even in their most restrained moments.

One of the most fascinating elements of Lao’s debut is that the listener can hear the artist’s curiosity and fascination with the sound of his instrument in space. On both sides of the tape, one audibly discerns Lao’s acute understanding of the environment’s effect on the produced work. The result is an interesting exploration of timbre, tone, and dynamics, all of which are captured far from the sterile environment of the studio (and so often the theatre or club). Recorded in Hangzhou’s Qinglongdong Tunnel, the extraneous sounds and cavernous reverberation do not merely serve as a layer of “field-recordings” or texture in the mix, but rather help the space assume the role of actant-cum-phantom instrument.

“Riou,” the opening track on side-B, is perhaps most illustrative of Lao’s range and prowess. The first third of the tune spectrally glides from dusty blues into melancholy ballad, before Lao hums into his mouthpiece, signaling a brisk departure into new territory. For the remaining ten minutes, Lao blasts rollicking sonic sidewinders that at numerous points threaten to blast holes in the listener’s headphones from the sheer intensity (a feeling underscored by the artist’s subdued screams in the closing minute). The closer, “Doppelganger & Immateriality,” features prominent use of sultry flute lines, which makes for a heady, meditative closer on a fantastic solo debut.

Fans of darker, more abrasive strains of free jazz would be wise to check out this release, out April 30, 2018. 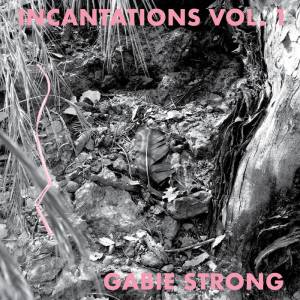 Having been greatly enamored with Gabie Strong’s supreme 2016 releases, Marginal HQ was abuzz upon discovering the artist’s latest cassette release, Incantations Vol. 1. Comprised of two trademark pieces of guitar driven aural mysticism, the latest release on the artist’s own Crystalline Morphologies label does not disappoint. Upon popping the tape into the deck and engaging the heads, the A-Side starts to uncoil into ‘Overhead, A Raven’, a 31 minute work consisting of field recordings, tinkling bells, immersive feedback, and a singing bowl used to great effect. Opening with a wind whipped recording of an assortment of bells and what upon first audition sounds like a large body of water, the listener unwittingly finds themselves immersed in an aesthetic experience that is one part ritual and one part audio vérité. Akin to sinking into a dream, the initial sounds are fluidly displaced by cascading feedback which ultimately brings the listener under it spell. Around 17′, the track begins to shift queasily; whilst lacking any obvious meter, the listener has the sudden sensation that the tempo has increased and the dense layers of sound assume a darkness not present in the composition’s opening half. After six minutes of immersion in a hellish tempest, the mighty, resonant ping of a singing bowl jolts one back into the present, not dissimilar to the electrifying surge one experiences when waking oneself from a nightmare. The pulsing drones of the singing bowl hold the listener with their sure embrace. Despite the simplicity of its construction and its duration, ‘Overhead, A Raven’ neither feels haphazard nor tedious. The B-side, ‘Incantation for Revolt Against Brutality’ is equally captivating in its simplicity. The opening 12 minutes revolve around spellbinding oscillations of feedback, punctuated by the warbling clang of bells. The track ultimately descends into meditative psychosis: a looped assemblage of monologues crescendo into inarticulate sound, melding with Strong’s amplifier. By the 20′ mark, the track assumes a gritty harshness, contrasting anything up to that point. Coupled with the recording’s fidelity, Incantations conjures the spectre of Keiji Haino’s early works; but make no mistake, Gabie Strong retains a unique voice and style all her own.