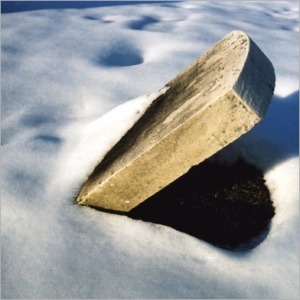 Not as thick or throaty as Peter Brötzmann and not as course or orotund as Mats Gustafsson, Paul Flaherty is just as spirited and verbose in his playing. With a timbre that is nasally and brisk, but at times utterly soulful, Flaherty will definitely appeal to most fans of the iconic Ornette Coleman. The opening trills of “Woman in the Polka-Dot Dress” give way to Flaherty’s nasally almost whistle like shards of sound. “Weren’t There Two of Them” opens with a violin like chords and changes direction into a claustrophobic fit of skronky, buzzy playing that at times sounds is mistakable for human screams. Flaherty’s rollercoaster whirlwind mellows and hardens — expect sharps turns, kettle whistles, and even some more relaxed melodic bars interspersed. The digital release of this album closes with Ken Delpointe reading his political poem “No More America.” The poem graces the back jacket of the LP, both providing the songs with their names and in essence, frames Flaherty’s music. It’s unfortunate that the reading of this powerful poem is excluded from the physical version of the record, but this may have been necessary given time/space constraints of physical media. While it doesn’t in anyway detract from Paul Flaherty’s playing, the closing statement that is the poem provides the listener with an entirely new reflection and understanding of Flaherty’s point of origin. A good solo record by Flaherty, however, the digital version with DelPonte’s poem, should be favored over the LP.