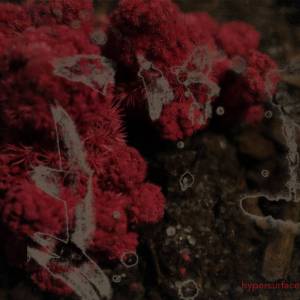 In these wintr’y days of gloom, where Nietzsche’s abyss stares hard and ‘tis hard for ye humble listener to find spry sounds to lift sullen spirits… But wait! What should fall upon mine ear? The eponymous debut of Brooklyn trio hypersurface — aye!

The debutants — consisting of Drew Wesley on six strings and things, Lester St. Louis on violoncello, and Carlo Costa keeping time and stroking cymbals — sound not at all abecedarian but rather resolute, cohesive, and assured. Not just banging the pots and pans, mind. The opening track “as wood waited” does well to prime the listener: the magician is at the ready. The terminal drag of a cigarette. Cloaked sun, bowing out in winter. A meditation on shortwave. Aye! In this arcane realm of free music(s) one needn’t listen nor look far to encounter awkward rumbling from the direction of guitar and cello. Not here — Wesley and St. Louis are up to task and possess the necessary restraint. The interplay is top notch and avoids lingering or tawdry overreliance on stompboxes.

Track two (“the binding problem”) opens with the apoplectic heartbeat of the bass drum before Costa’s percussive flânerie gives way. What follows is a veritable compendium of sonic exploration. The group lurches this way and that. Not lost, but deliberately adrift. The map is intact, but with place names rubbed off. In the ensemble’s collective wandering, the listener catches momentarily fragments: a jazz reverie, a cosmic balloon in all its tensile glory, a science-fiction seasickness. The shrill snap of a bell demands you to return to your seat just as you start to stray. For this listener, ‘folio’ takes the cake. Moments of languid foreboding straddle the cinematic. The group veers into some strange and inscrutable territory between A Handful Dust and the more subdued moments of Coltrane’s Om.

The penultimate ‘hard gold to love’ (auri sacra fames!) is the longest piece on the release by some distance, clocking in at 19’18.” Around the 2-3’ minute range, a moment of what seems to be a barely perceptible hesitation takes hold; a brief sortie into a rather unexpected progression (guitar? cello? Hard to tell…) on the tail end of this phase (2’46” – 2’54”) evokes the great spirits of 90s-era Dischord. Syntonic equilibrium follows. Henceforth, the group rollicks about clattering, submarining, crescendoing up into atmospheric heights which spill crystalline droplets back to terra firma like atmospheric marbles. And they’re back in, Sisyphean like, another jaunt to the summit. Not so much a casual Mt. Sinai stroll to receive the proscriptive tablets, more a rabid promenade to shoot the sun out of the sky. From the 17’01″ mark onward, some lovely stuff. The album concludes with the brief (2’58”) “scribbles of the sky at night.” The trio roll through a piece as playful as the title suggests — one need only imagine a percussive version of Jaco’s “Donna Lee” tossed into a whirlpool before the alarm clock goes off and the whole thing is a strange dream — except it isn’t at all.

hypersurface could easily find itself scoring any one of the many long takes picked at random from Béla Tarr’s oeuvre (though Irimiás and Petrina’s wind-whipped walk through town in Sátántangó specifically comes to mind). But where Tarr leans heavily into the  repetitious doldrums of life in its most mundane and excruciating moments, even at their heaviest (and headiest), hypersurface kick on — emphemerally light, collectively breathing fire. They giveth and taketh away, offering out a strange inventory of moods, timbres, progressions, sonic scraps, and half-thoughts in the process. This listener, for one, is excited for subsequent releases from what is sure to be a winning mix of players.

Fans of A Handful Dust or the Sophie Agnel / John Edwards/ Steve Noble Meteo record are sure to enjoy.