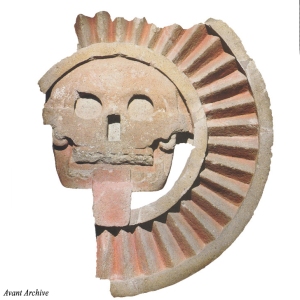 For the majority of the first half hour this collaboration between Jeph Jerman, Bob Blaize, and Travis Johnson proceeds to a placid and transcendent mediation which uses the timbre and resonance of tubular bells to draw the listener in. At the 25 minute, the rug gets pulled out from under the listener— the original source recording is superseded by crackling and heavy tape saturation. One makes out the sound of the bells in reverse. If the original tracking was done on a multitrack recorder, it’s entirely possible the ending of the first number is the flipside of the source tape recorded onto the master. “Sky Bells Pt. II” opens with the sounds of a thumb piano or perhaps a guitar being plucked in front of the nut. There is a splice and jump to a comparably meditative exploration of the resonance of bells. Tape noise and/or loops feature more prominently in Pt. II. What’s more, one of the artists in Pt. II seems to employ a bow or instrument capable of teasing out rich, violin-like sounds from the bells, creating a deeply engrossing sonic atmosphere, whose resonant frequencies linger long after the initial strike has ceased. Pt. II concludes with just under ten minutes of percussive extemporizing on a trap set with occasional touches of bells and tidal sounds. The track and album conclude with a few minutes of modal flute lines which sensually fades out before a final monologue is played in which a person incoherently speaks of pieces of alien spacecraft being found near a water well. This release skirts the edge of greatness. During its greatest moments of simplicity, it manages to be at its most sublime. While the tape loops do little to subtract from this effort, they simultaneously do little to augment it.