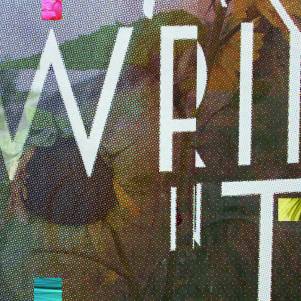 Yowza another blistering banger from Crow Versus Crow! Is Marginal Brevity slowly becoming the kool aid drinkin’, mumbling, despondent, pseudo-intellekctual embouchure for those West Yorkshire upstarts? A shoot from the hip, Pravda for the so-called No Audience Underground? The portents are there, friends.

The press release in its anodyne appeals to the layperson – not you humble, reader of all things marginal and brief – likens the release to the flowing, feathery tones from some fantastic middle territory between Brian Eno and Earth…maybe, maybe. To these ears however, a more suitable place might be Earth and Bill feckin’ Laswell. Carnivorous Plants, Bristolian, but don’t expect triphop, Mark Stewart, nor the Glaxo Babies. Posi-hesher zen metal vibes, abound!

The opening jab of Mammon, ‘The Second King of Hell’ is 14 er so minute splish-splash through a standard fair maelstrom with the obligatory pit stop at yr best mate’s, neighbor’s, cousin’s (twice-removed, mind) dominatrix’s pleasure dungeon (not that you’d know anything about that, though). The undertow inhales ya’ and proceeds to pummel yr soft flesh. Hows about that trusty safe word?

*If* the listener-cum-reader were to invoke ‘Ion’ Brian Eno (aka Brian Eno), ‘Pandemonium’ may well be the place. Reminiscent at times of Eno’s 1979 LP, Discreet Music (B-side, fam), the tune is the album’s shortest clocking in at just over 5′. And aye, it is a rather unexpected departure from the two pieces bookending it. Perhaps that’s the contextual pandemonium of it all… The piece is fairly placid and a wee bit sentimental tune largely driven by piano with recordings of rain and birdsong interspersed. A bit theatrical, a bit awkward amidst two choons of fairly fucking distorted guitar. And blammo, twenty minutes gone and the maelstrom relents and your sorry ace is flyin’ surface-ward to gulp in [sorry, all out!] air. If it’s predecessor is the long lost relative of Discreet Music‘s B-side, then the closer (‘Blood Orange’) is the pulverized best-fiend of the A-side. Distorted, transcendent, aspirational. For this listener, the centerpiece of the album.

A bit of a departure from the recent spate of CVC release, a bit more rock-y, shall we say. Something about the production values are, well, a bit Laswell-y. Boss chorus in there? No matter, Laswell cut Ask the Ages and no marginalites would say anything cross about that. Drone heads, guitar pedal tinkerers, and Pierre Aronnax & friends would be wise to give Mammon a swirl.