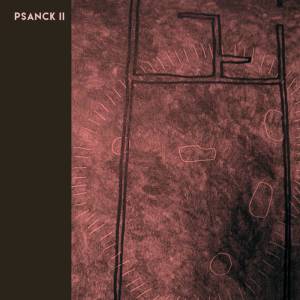 Buckle in — and prepare to slake yr Graham Greene allusions — as trio Psanck proffer Psanck II, their latest heaping helping of some tasty Brighton Rock! Errr Brighton free music. Right  —to The Heart of the Matter (couldn’t resist): Kev Nickells, Chris Parfitt, and Al Strachan deliver a 10 marvelously evocative tracks courtesy of Dylan Nyoukis’ Chocolate Monk label. Save for playful seven minute ‘Saith Cant Un Deg Un,’ nary a tune exceeds four minutes. Instead, the listener is treated to a series of hazy sonic vignettes. Though each tune varies in its approach and constitution, the album is bound by an overarching continuity: the listener revels in an auricular world that is equally reminiscent of Andrei Tarkovsky’s cerebral and slow moving cinematic ruminations and the spectral, sometimes indiscernible demarcation between waking and sleeping (maybe Tarkovsky also traverses this grey area?).

Particular standouts include ‘Tri Cant Deg Pedwar’ with initial primitive percussive thumps that mix with what sounds like a low drone (possibly courtesy of a hydrophonic recording being looped?) before a somber violin takes centre stage lending an air of surreal fatalism. Elsewhere, noise of the breath, disjointed thuds, whispy (sometimes heavily reverberant) flutes intermingle and create a diverse sonic world that winds up feeling like Frances Bacon doin’ a Bruegel study (ya’ follow?). Whilst the combo of string and flute sometimes invokes an almost mediaeval primitivism or some other aesthetic essence from a bygone era, the group counterpose any notions of vulgar-nostalgia or derivation by injecting firmly-contemporary motifs: the collage-like construction, the improvisational approach, and electroniche (e.g. the oscillations in ‘Pedwar Cant Wyth’, which by my ears, recall early Cluster)… In all, Psanck II manages to ride the dialectic razorblade of old/new (or wake/sleep) and produce a work that is sure to be a hit amongst fans of confectionary ascetics, the AMM, or Francis Bacon (but probably not a hit for Bruegel-ites and definitely not for Graham Greenies).