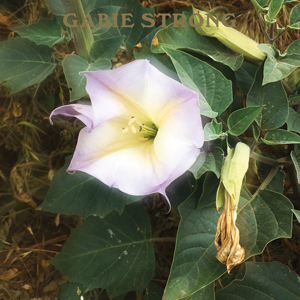 “What on earth is that sound and where is that coming from?” At least that’s what it appeared my cat may well have been thinking, ears shifting in every direction, body tensed as she drolly surveyed the unforgiving plains of my suburban living room. She decided that this party wasn’t where she needed to be and trotted out of sight, down the hall. I’m sure glad I didn’t follow suit. Gabie Strong’s Sacred Datura, offensive though it may’ve been to my feline friend, my humble anthropoid ears found to be rather enjoyable. “Sacred Datura” is tides of droning feedback, harmonic bliss, and clandestine sonic fury whipped into shape and sent grandiosely marching to the moon. Occasional vibrato dives pull the whole affair back down to earth and demand the listener’s attention, shaking you from the aurally induced daze, before buzzing out. Maybe kitty should’ve stuck around, as the reverse of the LP, “Peaked Experience” begins (and ends) with birdsong and guitar submersed in summer nostalgia, all of which is swallowed whole by some sort of phase or other modulation-effect. I have often seen it written that artists such as Strong are simply screwing around —making noise. No doubt less enthusiastic listeners (none of the Marginal Brevity faithful, I am certain) will be quick to classify this work as such. Such listeners, however, do little to lose themselves in the work and instead find making this type of totalizing statement as an easy alternative to truly and deeply listening (as opposed to listening through an ideological [earpiece?]). The reasons for doing so are far too numerous and complex to get into here, but the important bit is that such flagrant reductions cheat the aforementioned listener, bridled by their blind criticism, out of a whole host of experiences related to both immeasurable phenomena (emotions, feelings, textures) as well as the quantifiable aspects which make films and music(s) singular (time, volume, etc.) and spectacular aesthetic experiences. Strong’s work is every bit as rich and emotive as a painting or a work by Beethoven— just with more volume. Highly recommended.