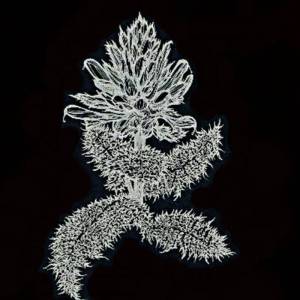 Most of the time the mere utterance of the words “punk rock” function as something of an emetic — a verbal/aural/linguistic ipecac, if you will. Hyperbole, no doubt, but the point is, following punk rock’s (very early) “recuperation” (to use Dick Hebdige’s term), the prevailing social order took whatever sting rock n roll offered, out of the tail. Enter: S.B.S.M. This band will fuck you up. Queercore from Oakland featuring three people of color—a fact that, as a person of color, I appreciate immensely. They’re as fun as kittens and cake on your day off, but they’re not messing around and they’re not to be taken lightly. If you could take Throbbing Gristle’s density and mix it with the anguish and ferocity of Damaged’s B-side, you might be in the ballpark. “Teeth” will have you singing “and they will decay” in your head ’til the cows come home. “Godzilla” opens with sci-fi soundscapes and barbed whirlwinds of sound before the twister gets sucked back into the heavens at around the 2:30 mark and the band lurch into a Slits meets Cocteau Twins meets the (early) Locust thing before the tune falls apart, like Tokyo in the monster’s wake. While the tempest thrashes the surface, ‘neath the waves lurks the darkness of  post-punk and some salient melodic cunning. The four songs featured on Joy/Rage feature all the introspection, honesty, and intensity that any great work of art possess. This one will be in heavy rotation at Marginal HQ for the foreseeable future.