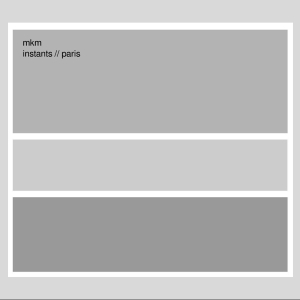 Deep and low drones mix with pulsing electronics, crackles, and static on this collaborative release entitled Instants//Paris by Swiss trio Günter Müller, Jason Kahn, and Norbert Möslang (aka MKM). This release bridges the gap between dark ambient and experimental electronics, favoring the sparsity of the latter. In all, the release remains sonically interesting and strange enough to engage the listener throughout. At times the vibes are ominous enough to shake you from your torpor and demand your attention; other moments, the artists are content to leave the listener with ample introspective space. This is the soundtrack from a bombed-out city: fragmented soupçons of radio broadcasts, and distant music(s) cut in and out. Malaise mixes with trepidation — or at least uncertainty.  A glimmer of hope appears momentarily in the form of a beautiful, sanguine melody in the final two minutes of the song, but it vanishes as quickly as it appeared. The ending feels a bit abrupt, which is likely the result of rushed editing, more than anything else, and ultimately does little to detract overall from an otherwise solid release.