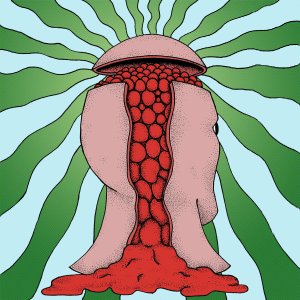 This 2017 release documents an improvised set featuring Indian experimentalists Infinite Jar Space and Spankeol. As champions of most things marginal here at Marginal Brevity, we’d recommend a prompt listen to this half-hour of power from the world’s second most populous nation – wildly underrepresented in most musings on avant-experimental-improv art. The set opens with heavily treated guitar which gingerly ventures into a heady, not quite psych, not quite shoegaze daydream. The dense, atmospheric vibes recall a stripped down My Bloody Valentine on a warped cassette, opting to forgo the Irish band’s pretense and sonico-spectral density. After the nostalgia of the first ten minutes, the duo pursue noticeably darker themes. Confrontational and nauseating guitar work strides to the fore, while saturated and delayed vocals sway underneath. In a marked departure from the thematic consistency of the first ten minutes, the duo manages to produce visions of early Blonde Redhead, stripped of any lingering pop elements and of the Boredoms channeling 1960s vibes (or maybe Les Rallizes channeling 1990s vibes) The fidelity of the release and the lovely wobbly analog characteristics help to craft an aesthetic that is as interesting as the music itself. This is sure to be a treat for fans of psychedelia, Sonic Youth, or improvised rock.