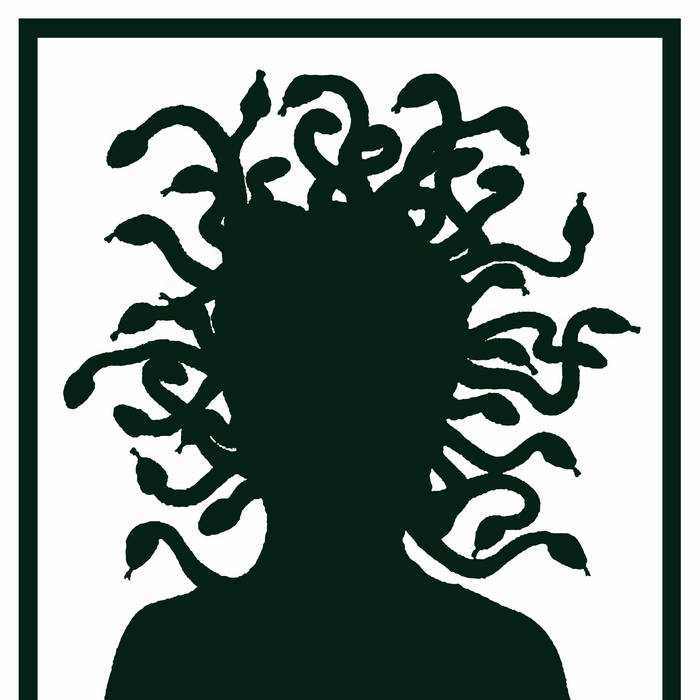 buzz buzz pip pip a pipping hot string of 1s and 0s has just got the Marginal antennae twitching… low ’n behold Hanson Records head-honcho is smashing out another magisterial midwestern mind bender. Like revolutionary poet-cum-Epic Records payrollee Zach De La Rocha reckons, it’s comin’ back around again! Well, what is “it”? Why, it’s Aaron Dilloway… and straight from the spookiest corner of the internet this side of Ohio, it’s a new release on the ol’ chap’s bandamp page. A (re-[?])release of that hissy, aural Droste effect (analogue on analogue, mind) Medusa.

Updated artwork! Trés minimal…oooh…ahhh [Caravaggio’s Medusa was/is -to be frank- a stupid painting, so a much welcome change – ed.] Well maybe not a reissue or a re-release, but just a first time release via this distribution channel. For any Marginal devotee (all six of you) not in the know, Medusa first saw release as a six mini CD-R release in 2009 Limited stuff, friends. More limited than that very out of print Vladimir Lenin EP Vanguard, Live at the Village Vanguard* that your friend’s partner’s sister’s older brother had. Alas, Medusa is digital and available (who even owns a CD player anymore, anyway?).

Right. On to the jams.

In digital form, six mini CD-Rs become six tracks of tape hiss crumbling from the speakers. Sit back and settle in, Medusa is a wholly immersive experience™ – part febrile euphoria, part hazy daydream punctuated by the eerie nag of your favourite LPs runout groove gone on too long. It is easy for one to forget that the driving force behind this release is, in fact, one of the technological “limitations” (read: charm) of a sonic medium. Under Dilloway’s control, these limitations give way to a new creative genesis that emerges from the technological strictures. That which was once a mere incidental artifact, becomes the driving force of the work. Some of the pieces are subdued (“Medusa II”), whilst others force the listener to run the gauntlet (Medusa III). The warm, crackly tape hiss wows and flutters— each piece possessing its own strange, breathing cadence. The tracks are slow moving, but evocative; arresting, but not incessant. Many of the pieces leave the listener in a tranced-out bliss, broken only by the harsh cessation of sound at each piece’s respective end.

Undoubtedly, it has been cited by the likes of Marginal Brevity before, but I’d be wholly remiss to overlook Walter Benjamin, the preeminent theorist of art in the then nascent mechanical era, who remains insightful in our digital age. Benjamin’s thoughts on ‘the revolutionary energies that appear in the ‘outmoded’” and on reproduction are both instructive in trying to theorize this piece of Dilloway’s work. [1] In pondering what I perceived (heard) as Dilloway’s reproduction of the truly marginal (imagine a [re]producer copying ambiguous fragments of any visual work – for example, a small, indistinguishable corner of any painting) and modifying it at length, I recognized a strange cycle of death is set in motion: the artist (“the [re]producer”) copies a portion of the original art piece; the artist reproduces this fragment; the original is superseded by an unintelligible fragment (at the point of total unintelligibility, the original art work suffers its “death”); the unintelligible fragment forms both a new singular work (“birth) and the lexicon of a new kind of artwork.

Techniques of negation within art are perhaps as old as the notion of the dialectic itself. When reflecting on art since industrialisation, collage most readily springs to mind. Within the realm of the aural, the remix is, as inimitable DJ Spooky has pointed out, is a kind of sonic collage. [2] Whilst Medusa may not be the prototypical club track remix, the technique isn’t wholly unfamiliar. His source materials and gravitation toward the fragmentary, however, remain firmly situated in the realm of the outmoded.

At this point, a brief aside / anecdote: a friend had recently brought to my attention the work of Manchester’s James Leyland Kirby, specifically, the work created under his Caretaker moniker. Said friend shared that they had recently read several articles, all of which praised Kirby’s final release under that guise — the six part Everywhere at the end of time whose final installment arrived in 2019. Admittedly, I am unfamiliar with The Caretaker and Kirby’s work; however, upon hearing of an experimental artist making heavy use of obscure analogues technologies (namely phonographs) and a six part work — my thoughts returned to Dilloway.

I initially operated under the premise that the Caretaker pieces were a new release and thus found the timing of Medusa’s (re)release to be rather curious. Was Dilloway making a comment on Everywhere…? Was there a dialogue unfolding? Well, no — and yes, of course. Upon clarifying that Everywhere… was not a new release and moreover, realizing that Kirby began work on this series in the late 1990s, prior to Dilloway’s Medusa, my thoughts swung back and forth between Dilloway and Kirby. Why did the latter invoke the former and vice versa?

The purpose of this anecdote is not to highlight my meandering thought process, so much as to help to illuminate a shared intelligibility. Both tap into the same vernacular enabling the listener to recognize a simpatico shared between Dilloway/Medusa and Kirby/Everywhere at the end of time. This vernacular becomes even more discernible in one’s near immediate recognition that both sets of work possess the attributes of what might broadly fall under the rubric of “experimental” [music(s)]. In other words, whilst my perception of Dilloway’s work as a riposte to Kirby slightly misses the mark I initially focused on, the recognition of methodological commonality — and a shared artistic lexicon — illuminates the presence of a discursive space where a dialogic relationship exists, regardless of whether or not the two artists know one another or are familiar with each other’s work. The space that this relationship and discourse occupies, in turn allows other participants to make sense of the dialogue †, should one possesses enough knowledge of the relevant vernacular (in this case, the lexicon, gestures, or in linguistic terms “utterances” of analogue-heavy sonic experimentalism). As the Soviet literary theorist, Mikhail Bakhtin notes, “dialogic relationships are a much broader phenomenon than mere rejoinders in a dialogue […] they are an almost universal phenomenon, permeating all human speech and all relationships and manifestations of human life — in general, everything that has meaning and significance.” [3]

Having started listening to Everywhere at the end of time, one can recognize that sonically, Kirby and Dilloway’s works remain discrete and my initial impression is that the works differ drastically different. At the same time however, as aforementioned, even the most discerning listener would have a difficult time not categorizing these works within the realm of experimental music(s) and/or recognising degrees of aesthetic overlap.

Differences notwithstanding, the ability to place both works within an intelligible continuum perhaps raises further metaphysical questions on the very (and varied) nature of experimental music(s), but the big take aways are thus:

Despite their discrete appearance and stylistic differences, Aaron Dilloway and James Leyland Kirby’s dialogic relationship occurs within what one may consider a Benjaminian (oh god) space of discourse: the outmoded is appropriated and (re)production of new works emerge. For whatever their individual differences, the works share recognisable, coherent similarities which situate them within the same continuum/dialogue.

2. And uh, Dilloway’s record feckin rips (I cannot in good conscience offer anything on The Caretaker’s work…yet).

† Incidentally, Benjamin acutely recognized the dialogic nature of [re]production and its ability to destabilize the artist(monologic)/audience binary: “the distinction between author and public is about to lose its basic character […]at any moment the reader is ready to turn into a writer”. (see Benjamin, The Work of Art in the Age of Mechanical Reproduction, 23.)

[1] See: Walter Benajmin, ‘Surrealism the Last Snapshot of the European Intelligentsia’ in One Way Street and Other Writings (London: NLB, 1979), 225- 239; Walter Benjamin, The Work of Art in the Age of Mechanical Reproduction (London: Penguin Books, 2008).