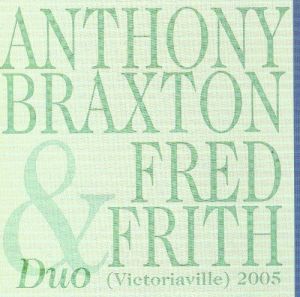 2005 was clearly the year to be at FIMAV in Québec. The last installment featured was culled from the 2005 festival as is the case with this one. Kudos to Les Disques Victo for enabling those of us unable to attend to hear the meeting of minds documented on this disc. Featuring 5 unnamed improvised pieces, this collaboration is certainly enough to wag some tails at Marginal HQ. “Improv. no. 1” sees our heroes trying to decide: left or right at the crossroads. The tug at one another, Frith peppering Braxton’s soulful playing with volume swells and Henry Cow-esque lines. They match each other tit for tat with staccato bursts, embrace dissonance, before Braxton sits back and let’s Fred Frith, Fred Frith. “Improv. no. 2” picks up where the last tune left off, but is decidedly much more playful. Braxton’s almost flute-like playing sails over top of Frith’s rather percussive combination of strum and swell. Around the five minute mark, they ease into silence. The rest of the affair is relatively restrained. “Improv. no.3” is the most meandering of the set. No surprise perhaps, as the tune exceeds 22 minutes. F.F. and A.B. take turns sitting and hitting. Frith’s tremolo-laden psychedelic barbs make for an interesting mash up with Anthony Braxton’s sonic wandering. Piece number 4 is fairly subdued and effectively the calm before the storm, as the set’s closing piece puts the pedal to floor for the first 4 minutes. Braxton sails out with bombast, while Frith’s volume pedal antics sound like strange tape loops. They mellows out a bit halfway through and land softly. A good record, however, seeing it live was unquestionably the more sublime experience. Impressive to hear these improvisational giants playing with one another, but not sure this release jumps ahead of Topography of the Lungs when I’m looking for this sort of vibe. Just the same, well worth checking out.