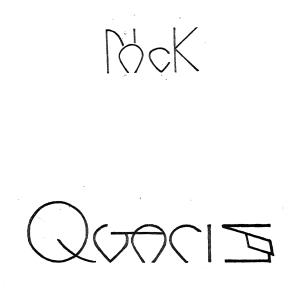 Far and away the most approachable release by the New York 7-piece, No Neck Blues Band’s 2005 release Qvaris is a multilayered, dense, and challenging set of jams, which is still tame enough to capture the hearts and minds of yr standard-issue rock aficionados. I am certain beyond a doubt that somewhere, one of those music journos or parent’s house posers has happily ascribed No Neck as the bonafide front runners of postmodernist post-rock — which I am decidedly post-the bullshit. Not your typical snail’s pace digital delay-laden indie ballad snooze fest, NNCK instead knock out some of the most solid groove-oriented improvised rock music since the stellar kosmische groups of postwar Germany. Vibes a là early Holger Czukay and This Heat, but still singular and interesting in its own right. The swaggering “Live your Myth in Grease” recalls early Blonde Redhead before evolving into an ethereal alien soundscape of heavily modulated, dripping guitars or keys or theremins— who fucking knows. One of the most endearing and exciting elements of NNCK, is their seamless ability to erase the distinctions between instruments and instead perform as a collective unit. Check your ego at the door. “The Caterpillar Heart” sounds a like a scene from a Terry Gilliam film, while “Boreal Gluts” and “Lugnagall” take pages from Faust’s playbook, glazed with a thin a patina of New York City filth, natürlich. Improvised music at times has a degree of seriousness to it, and for some, that’s surely part of its allure. That said, Qvaris has a clear sense of humor and the band well and truly sound like they’re having fun. As witty as a palindrome, this. I like to think that the band burst in laughter when they put down their instruments. A rock record at the end of the day, just not a big, dumb rock record.