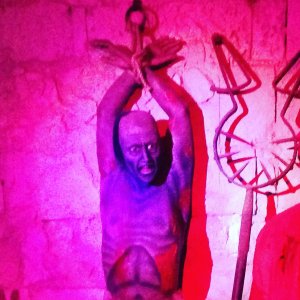 Former Wolf Eyes noisenik Aaron Dilloway’s 2016 release, Live at a Museum, is a brilliant half hour of loop experimentation, well worth delving into. Comprised of a series of sets, Dilloway ventures through a universe of myriad sonic possibilities vis-à-vis tape loops, minimalism, and manipulation. “Set 1” is comprised of a hypnotic tape loop sputtering restrained panting, click-clacking, and paranoid resonances.  “Set 2” is a faster, slightly more abrasive, certainly much more confrontational loop, which, despite its shorter duration, remains simultaneously soporific and aggressive. It sounds as if digital artifacting passes through the tape (or perhaps this is the sound of the A to D Transfer) before at around the three minute mark, Dilloway starts to fade the loop out. Groggy and blunt thuds intermingle with the soft swish of a hit-hat or other similar percussive sound. The loop morphs into a strange and gritty track that seems entirely apt for the end times. “Set 3” is reminiscent of Chris Watson’s later work, with the loop recalling the sounds of a windy day from inside. In all, Live in Museum demonstrates Aaron Dilloway’s mastery of analog tape delays, his patience, and his celebration of subtlety. These traits allow the artist to tap into several sonic realms at once, making for a collage-like creation of something totally distinct. Sure, Aaron Dilloway isn’t the first (or even the best) to forge a body of work relying heavily on analogue tape; he is, however, one of the few people who is capable of merging Gristle-esque discomfort with Harmonia’s pastoralism, all without committing to the musicality of either.