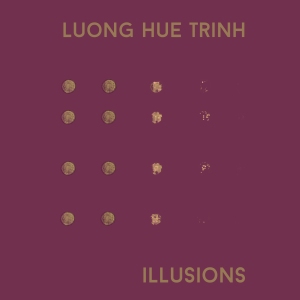 Formally trained as a jazz musician, Hanoi’s Luong Hue Trinh, now works primarily in the realm of electroacoustic music. Her digital-only debut through Pan y Rosas Discos, Illusions, is a half-hour of power and arguably one of the most engaging and profoundly engrossing experimental releases in recent years. Startlingly (and most appropriately), the opener, “illusions,” begins with the sound of breaking glass. The track evolves into a 12 minute exploration of non-musical industrial sounds melded with traditional South-Vietnamese music. The result is emotive, captivating, and far from predictable. Whilst the opener positioned traditional musics alongside industrial sounds, the dichotomy between old and new is effectively inverted on “return ii.” Predominately “driven” by electronic musical treatments, the track employs pastoral sounds in place of those produced by industry. The denouement builds anxiously before giving way to fading strings and chants. Despite its brevity, Illusions is not to be missed. Given the strength of her debut, everyone here at Marginal HQ eagerly awaits Trinh’s next release.