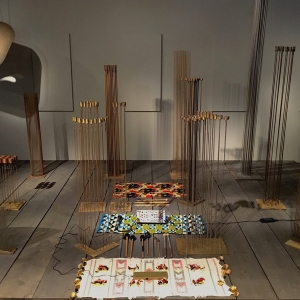 After a September sabbatical, which included lots of work, a vacation, and more work,  Marginal gears are creaking back into rotation at HQ. Just in time too, because we’re sure excited for this release from veritable sonic-journeyman and bonafide aesthete, Robert Aiki Aubrey Lowe. For their exhibition Atmosphere for Enjoyment: Harry Bertoia’s Environment for Sound, New York’s Museum of Art and Design commissioned Lowe (and Lizzi Bougatsos of Gang Gang Dance) to produce a series of sound and video recordings at Bertoia’s Pennsylvania sonambient barn. These recordings released on the DDS label, are the result of one such session. As is to be expected, the ambience of the barn coupled with the sculptures’ already ethereal sonic characteristics, results in a set of magisterial, widely resonant pieces, featuring manipulations of Bertoia’s sound sculptures. Where Lowe excels, is in his ability to harness the happenstance of improvised performance. Levitation Praxis allows the artist to demonstrate an artistic awareness and tact that inform the aesthetico-methodological choices: when to push on and further develop an idea, when to refrain, et al. Interwoven layers of choral melodies and urban sounds produce a rich sensory experience for the listener and explode the temporal and contextual framings around the works. Is it medieval religious chanting? Is it musique concréte? It’s dually both and neither all at once. While Bertoia’s original recordings are imbued with a certain otherworldliness, Lowe’s tasteful use of vocal and tape treatments add a new dimension to sonambient execution and composition.

A final salient point: in the relative racial homogeneity of many avant-garde circles (a point itself, that remains woefully under analyzed), as a person of color, this writer/listener can truly appreciate that Lowe’s (marginal) artistic practice(s). Indeed, his very inclusion in this project, helps to illuminate that artists of color, especially those whose artistic practices transpire on the margins, must often simultaneously navigate a host of margins, many of which are far more consequential than one’s chosen aesthetic path. Furthermore, if marginal artistic practices and music(s) are ever to serve as incubators and/or catalysts for radical social change, the spaces and imaginaries that reinforce the avant garde must first begin to chip away at homogenous understandings about who occupies these spaces and in a very literal, normative sense, what the avant-garde looks like. At the risk of succumbing to blind optimism, the future is likely to be diverse (and factually speaking: less white); but the real question is, can the avant garde remain the vanguard?